On September 11, two square shafts of blue light will ascend into the heavens from the ground of New York City. Here's the tech behind the tribute.

Tonight, at sundown, two square shafts of blue light will ascend into the heavens from the ground of New York City, symbolizing the former towers of the World Trade Center.

These shafts of light shine in tribute to the men, women, and children killed during the terrorist attack on September 11, 2001. 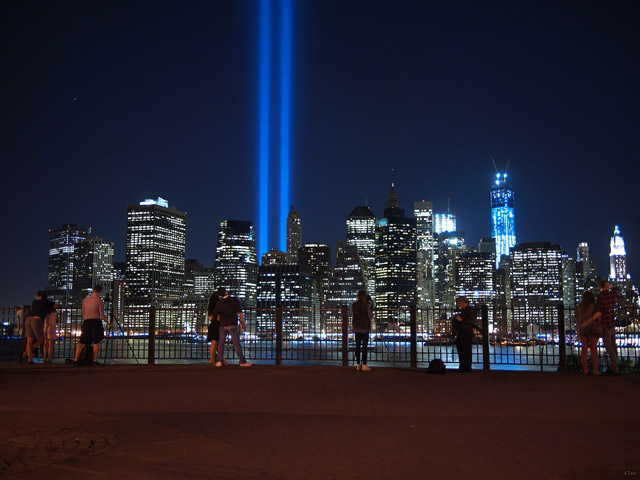 “Tribute in Lights” is the product of artists Julian La Verdiere and Paul Myoda. It consists of 88 7,000-watt xenon spotlights in the shape of two squares that shine four miles into the sky—the strongest shaft of light ever projected vertically into the sky. Xenon lights are the same type used in such common devices as strobe lights, camera flash bulbs, and IMAX and digital film projectors. The lights can be seen from over 60 miles away.

It takes a lot of energy to power the generators used for the lights. In an effort to be more environmentally conscious, the generators are fueled with biodiesel fuel made from cooking oil that is collected from local restaurants. Contrary to what you may think, the ideal atmospheric conditions for the lights are a misty fog—the light needs to reflect off of particles and moisture in the air. They are truly an achievement of contemporary lighting techniques.

The technology behind this tribute is a feat, but the artists behind them originally had an even more cutting-edge project planned for the World Trade Center. La Verdiere and Myoda were exploring the possibilities of using bioluminescence to create beams of light. Their studio was located within World Trade Center 1 (the north tower), on the 91st floor. In 1999 they began to explore the possibility of creating a bioluminescent beacon of light that would be emitted from the radio tower of the north tower.

The light they planned to use is based on innovative research into bioluminescence—the natural light emitted by some living organisms (“living light”). The artists’ goal was to develop a way to amplify and control the bioluminescence of some of these organisms in order to use them to beam light. One organism in particular—sea plankton (dinoflegellates), which emits a blue light when it is agitated in the water—seemed promising. 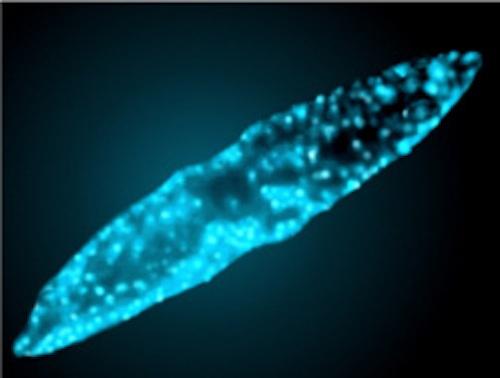 Bioluminescing Dinoflagellate. A biological clock triggers bioluminescence in the dinoflagellate Pyrocystis fusiformis. At dusk, cells produce the chemicals responsible for its light. Photo by E. Widder, ORCA, www.teamorca.org, via the National Museum of Natural History.

This research took place in the invertebrates department of the American Museum of Natural History in New York City. Over the next six months, the artists selectively bred different planktons in order to create the brightest and largest bioluminescent plankton possible. They also learned how to control when the plankton rested and when they emitted light. They planned to use the amplified light of a single bioluminescent celled organism as a “bioluminescent beacon” that would shine like a spotlight from the world trade tower. The “bioluminescent beacon” was slated to be unveiled in spring 2002.

With preliminary work completed, La Verdiere and Myoda moved out of their World Trade Center 1 studio several weeks before September 11. A desire to mark the six month anniversary of the terrorist attach resulted in their work being put to a modified use. While the xenon spotlights used in “Tribute in Lights” replaced the bioluminescent concept, there are undeniably similarities in the projects.

Using bioluminescent light for human lighting solutions is something still being explored by many. A team of scientists from Syracuse University are attempting to create lighting using the bioluminescence of fireflies. The team believes that their bioluminescent lighting system could be 20 to 30 times more energy efficient than any previous systems. Also, bioluminescent bacteria are also being used by Philips Designs to produce lighting that will both consume waste and emit light. Research projects on human uses for bioluminescence are at the cutting-edge of energy efficient lighting experimentation. As research in this field advances, perhaps La Verdiere and Myoda’s work will truly come full circle and, in the future, living organisms may fuel the light emitted from the National September 11 Memorial. Intended to symbolize lost life, I can’t image a more fitting place for two towers of “living light.”

For more information on how the “Biolulminescent Beacon” please go to “The Genesis of the TRIBUTE IN LIGHT” by Julian LaVerdiere and Paul Myoda.