Who Invented the Super Bowl Trophy?

As I begin to anticipate the 2014 Super Bowl, I wondered: Who invented the Super Bowl Trophy?

After working at The Lemelson Center for a while, it’s not hard to see that invention is all around us. In the news, in our interests, and in our daily life, it’s easy to find the invention story behind the objects and people who we encounter.

For example, I’ve been watching quite a bit of football since the start of the season. I love keeping up with my team, the Seahawks, and following along with the local team here in Washington, D.C. Last year my colleague wrote about innovation in football helmet technology designed to keep more players safe from head injuries, which is still a relevant conversation. Looking to the future, lots of fans are anticipating the 2014 Super Bowl, myself included. Which got me wondering: who invented the Super Bowl trophy?

According to Westchester Magazine, a publication from Westchester, NY, the idea of having a trophy came in 1966 from then NFL commissioner Pete Rozelle. He contacted Tiffany & Co., where he began collaborating with the head of design, Oscar Reidner.

Apparently Reidner had never watched a football game or held a football, so he immediately bought one at a toy store. He then cut up a cereal box for a prototype and met for lunch with Rozelle, where he sketched his idea on a cocktail napkin. Et voila, a major American icon was invented. Tiffany & Co. continues to handcraft a new trophy every year, which is incredible! 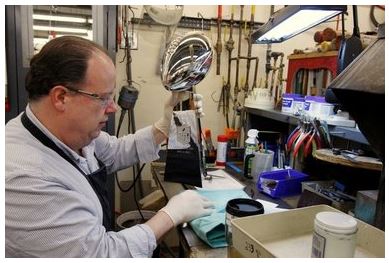 A silversmith at Tiffany & Co. works on the trophy. Screenshot from NJ.com.

Next time I covet that pair of diamond earrings from Tiffany’s, I’m sure I’ll remember that they also produce a football-related invention. It’s fascinating to continue finding invention stories wherever I look.