In 1978 George Powell, a mechanical engineer and avid skateboarder, and Stacy Peralta, who was among the first pro skaters in the 1970s, founded Powell-Peralta, one of the most prominent skateboard manufacturing companies of the early 1980s. Powell-Peralta used skaters' input to design its boards, making them highly desirable to the up-and-coming skater. To promote its expanding line of products, Powell-Peralta created the "Bones Brigade," one of the greatest skate teams ever assembled. The best skaters of the day, including Steve Caballero, Lance Mountain, Mike McGill, Rodney Mullen, and a young Tony Hawk traveled the country, displaying their tricks and elevating their sport to new heights.

In 1985, Powell-Peralta became the seventeen-year-old Hawk's primary sponsor, with Quiksilver following soon after. Founded in the early 1970s, Quiksilver was one of the first skate and surf companies to manufacture boards along with an ever-growing line of apparel for both men and women. Another of Hawk's sponsors, Tracker Trucks, a skateboard truck company founded in 1975, is credited with introducing the first widely accepted truck designed specifically for skateboarding. Hawk's 1986 board features Tracker magnesium trucks and a lapper--a now-obsolete small piece of plastic that protects the truck bolt and provides a smooth surface when grinding--to cover the rear truck.

As the popularity of skate tours increased, sponsors found expanding media opportunities to advertise their products within the skate community. One of the most ubiquitous was stickers. For example, the Powell-Peralta flying-skull sticker on the bottom of Hawk's deck is from Powell-Peralta's 1986 Summer Tour across the United States. Vernon Courtlandt Johnson, an influential skate artist credited with introducing the skull into skate culture, designed the sticker for the tour and also designed Hawk's trademark logo, the now-famous Tony Hawk iron cross design that is prominently displayed on the bottom of the deck.

The Carlsbad Pipelines sticker represents Tony's early career and his willingness to support hometown skate shops. After moving with his family to Carlsbad, California, while still in high school, Hawk became a fixture at Carlsbad Pipelines surf shop. Skaters often promoted hometown shops that helped them out at the beginning of their careers. The Transworld Skateboarding magazine sticker highlights Hawk's role in popularizing the sport, especially among younger skaters. Hawk and other well-known boarders made editorial contributions to the magazine, founded in 1983 as an alternative to the adult-oriented crudeness of Thrasher magazine.

Stickers also illustrate the growing influence of skate culture that was felt in the music world. Rock bands influenced by skate, like 10 Foot Boneless in the mid-1980s, distributed stickers through skater magazines (the band's stickers appear on several of Hawk's boards, including the one donated to the Museum).

Tony Hawk's early career and the evolution of skate culture in the 1980s can be read through the technology and the stickers on the skateboard that he donated to the Museum. I'm sure Hawk's other boards tell similar stories of different stages in his career, the technological advancements of the last twenty-five years, and the impact that skating has had on American culture. As Tony Hawk told ESPN reporter Matt Higgins: "Skaters have always been known to be unique and artistic, so the lifestyle encompasses much more than the physical act. It has influenced art, music, and fashion, and helped to redefine sports in our country." 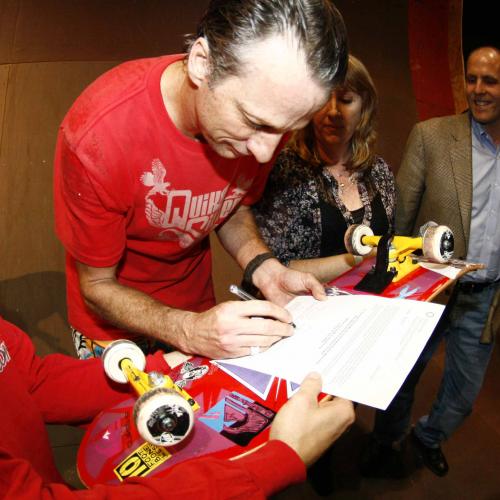