Why didn't the geniuses’ refrigerator ever make it to market?

The refrigerators of the 1920s were deadly. Their motorized compressors easily malfunctioned, allowing the refrigerants—that is, toxic gases—to escape and sicken or kill whole families in their sleep. Albert Einstein and his colleague Leo Szilard, physicists at the University of Berlin, took the matter in hand in 1926 and invented a pump to replace the refrigerator’s motorized compressor. The device, hermetically sealed and with no moving parts, relied on Einstein and Szilard’s cutting-edge research in electromagnetism and thermodynamics.

Einstein and Szilard received a US patent for their new apparatus and method of refrigeration on November 11, 1930, and yet, after seven years of hard work, they were unable to commercialize their invention. Some of their difficulties are familiar to inventors today: rival innovations in foreign countries and insufficient support from investors at home, to name two obstacles. Others are less familiar: total economic collapse and widespread political violence.

Einstein and Szilard had met in the early 1920s, when Szilard was still a physics doctoral candidate at the University of Berlin. On the faculty there, Einstein supported Szilard’s academic work but advised him to do something practical—ideally, pick up a patent or several. (Einstein was a passionate inventor and erstwhile patent examiner.) 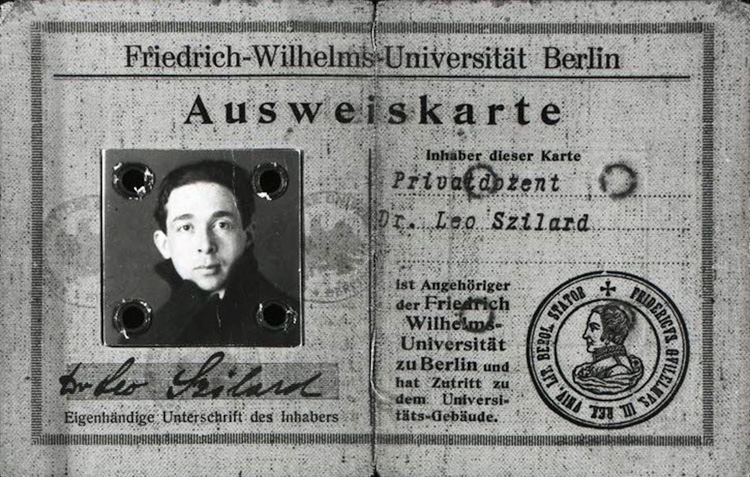 In 1926, the pair started working together on a solution to the widespread problem of killer refrigerators. As in-home refrigerators replaced iceboxes, lurid stories proliferated in the press of methyl chloride, sulfur dioxide, and ammonia leaking into people’s homes. The culprit was usually the pump valves.

Einstein and Szilard eliminated the risk of leakage by jettisoning the mechanical pump. Working under the auspices of various German engineering firms, they created a device with no moving parts that instead used an electromagnetic field to power the necessary compression of refrigerant gas. They filed a patent application in Germany on December 16, 1926, and in the United Kingdom and the United States exactly one year later.

It took three years for Einstein and Szilard to receive US Patent 1,781,541, and in that waiting period, their world started to fall apart.

The Great Depression hit Germany in the fall of 1929, when US banks began to call in their short-term loans to German businesses. Soon, there would be no capital left to fund projects like Einstein and Szilard’s. To make matters worse, political violence became widespread in 1930, a result of mass unemployment and antidemocratic machinations by German elites and right-wing extremists. The Nazi Party took the lead in beating and murdering communists, socialists, and Jews. Nazi squads targeted people like Einstein and Szilard not only for their Jewishness but for their pacifism and preeminence in the so-called "Jewish physics." Nazi newspapers demanded that Einstein and the others be hounded from their homes and forced out of the country.

Throughout 1930, attacks on members of Berlin’s Jewish community increased as Nazis and their ideas infiltrated the city’s institutions—the newspapers, the schools, the universities, and the police. 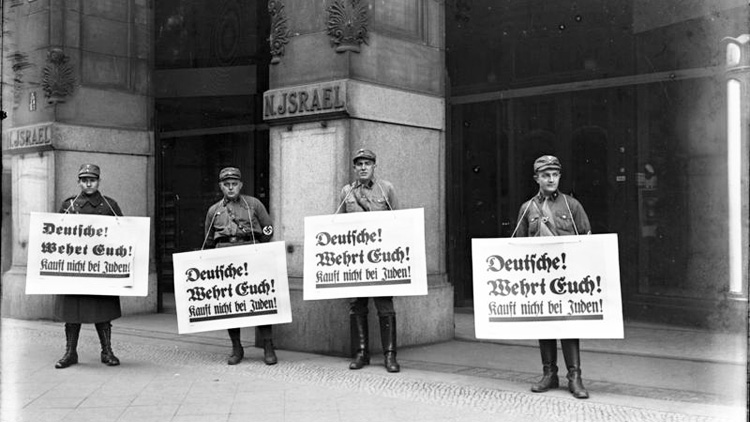 Nazi storm troopers enforce a boycott of a Jewish-owned department store, Berlin, 1933. The sign reads, "Germans! Defend yourselves! Don’t buy from Jews!" Courtesy of the Bundesarchiv via Wikimedia

Nevertheless, Einstein and Szilard pressed on with attempts to get their refrigerator into production, even as the chances of doing so in Germany evaporated. Szilard and his team refined the prototype in their workshop at Germany’s General Electric Corporation in Berlin until the firm slashed its research budget in the face of a worsening economic crisis. On a trip to the United States in 1931, Einstein shopped the invention around to no avail.

The American chemist Thomas Midgley had just demonstrated the safety of Freon, the brand name for chlorofluorocarbons (CFCs), a mix of compounds containing carbon, hydrogen, and various halogens (e.g., fluorine and chlorine). As a result, development in refrigeration technologies shifted in favor of new refrigerants like Midgley’s rather than new compressors like Einstein and Szilard’s.

It was here that Einstein and Szilard halted their work on the refrigerator. Historians argue that they did so because their invention was not commercially viable after the advent of Freon. That might be true, though a few other factors were at work against Einstein and Szilard. The uncommon severity of the Great Depression in Germany eliminated their funding; the rapid ascent of the Nazis endangered their lives. Both men fled Germany around the time of Hitler’s consolidation of power in the early 1930s.

It isn’t possible to know what Einstein and Szilard might have accomplished, had their professional and personal lives not been interrupted.

An Afterlife for the Einstein-Szilard Refrigerator 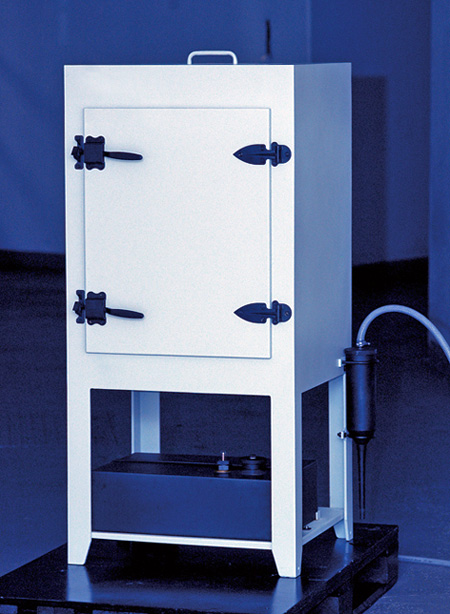 Working model of the Einstein-Szilard refrigerator built in 2005. Courtesy of Universität Oldenburg

Freon, it turns out, isn’t quite the miracle it seemed to be in 1930. It might not kill us in our homes, as did the older refrigerants, but Freon is a greenhouse gas that has depleted the earth’s ozone layer. Toward the end of the 20th century, when the damaging properties of Freon and other CFCs became known, scientists and engineers became interested once again in the Einstein-Szilard refrigerator.

In 2005, a research group at Germany’s University of Oldenburg built a working model to Einstein and Szilard’s 1930 specifications. Bringing the inner chamber’s temperature to a frosty 0 degrees Celsius, the electromagnetic pump worked beautifully, its chemicals safely contained and unlikely to do anybody any harm.