We think a lot about sequins here—about their care and conservation—the history of their invention and evolution—and they ways their sparkle conveys the magic and glamor of performance.

From the Hollywood movies of Judy Garland to the honky-tonks of Patsy Cline, sequins have played an important role in audience enchantment. Their very glimmer is a kind of short-hand for magic—the magic of a fantasy world conjured upon a screen or the magic of a voice stirring powerful emotion. It was the marriage of sequins, intense light, and Technicolor, after all, that gave those slippers their ruby glow in The Wizard of Oz and conveyed their inner power. [1]

“The iridescent glimmer of sequins are essential elements in the larger-than-life persona of many a performer. It’s as if the shimmer allows them to bring their own special lighting to the stage.”

Sequins—whimsically employed—are what first drew me to artist Timothy Westbrook’s Pabst Blue Ribbon shoes. They were posted on Facebook by Milwaukee’s Pfister Hotel where Westbrook is Artist-in-Residence. Online, the shoes were gorgeous and charming—their blue bows and red ribbons lining up just right—but it was the sequins’ brilliance and texture that put them over the top. I have two-stepping friends who would die to dance in them.

My cousin Rebecca’s wedding brought me to the hotel soon after, and in a quiet moment I discovered Westbrook’s studio just off of the hotel’s ornate 19th-century lobby. An odd place for PBR shoes, you might think, but this is Milwaukee, home of the Pabst family of brewery pioneers. Pabst Blue Ribbon is about as iconic as it gets in this place of invention. 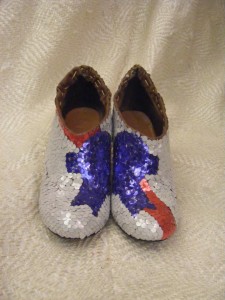 I spotted the shoes right away—twinkling amid mannequins, gowns, and sparkling fabric being woven on a giant loom. I moved closer. I had never seen sequins like these—like round pieces of confetti arranged as if scales on a mermaid’s tail. I couldn’t stop looking.

“Please touch!” enthused a voice from behind a non-electric treadle sewing machine. The kind and welcoming artist himself. Even with permission, I was hesitant to touch, but I’m so glad I did. Those weren’t sequins at all! They were red, white, and blue aluminum circles hole-punched from PBR cans! I loved the shoes even more for their surprise—for the inventive way that they not only celebrated an iconic American product—they were the product, recycled back to life. 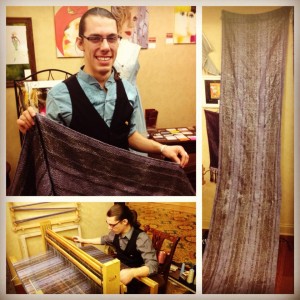 Each shoe, Westbrook explained, was covered in over 2,000 aluminium circles hole-punched from used PBR cans. Separated for color and pattern, the “sequins” were then meticulously glued to a pair of vintage shoes over the course of 32 hours. Next to the PBR shoes were the latest entries in what Westbook calls his, “Drinking Shoe” collection: “Strongbow shoes” made from the hard cider’s distinctive yellow and black cans. 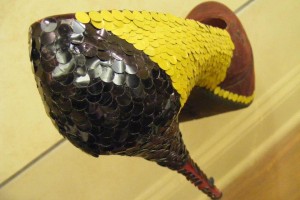 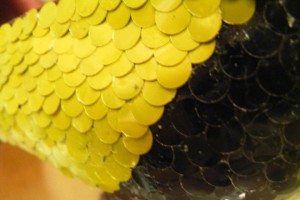 The “magic” of the PBR shoes, I told Westbrook, made me think on some level of that most celebrated pair of sequinned shoes in the Smithsonian’s collection. Funny I should say that: Westbrook recently created “Ruby Slippers” for a project commissioned by Misha Rabinovich.

The result is a spectacular pair of shoes that would make the Wicked Witch of the West take notice: a sparkling duo made of thousands of aluminum “sequins” from another American icon: Coca-Cola. The project was difficult on several levels—the heel, for example, is often wrong in reproductions—but Westbrook’s greatest challenge was creating something that evokes the public’s powerful memory of the shoes while providing a 21st-century twist. 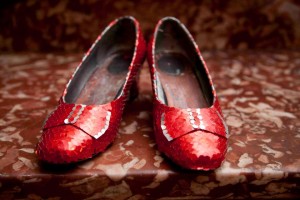 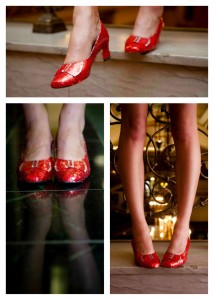 “The closer I get to garbage the more interested people are, ” Westbrook said. ”When they don’t know what they’re looking at, when they have to look closer and differently to figure it out, they see the innovation—that it’s not garbage at all—it’s something beautiful and a piece of Americana.”

Turns out, there was more to see, including other pieces made from recycled materials such as audio cassette tapes, MRI film, scrap yarn and fabric, umbrellas, medical splints, electric wire, and those ubiquitous white plastic bags. Even retired sheets donated by the Pfister get a second life as gowns. 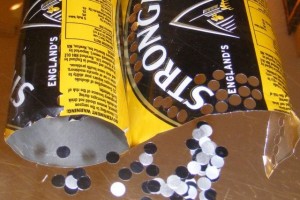 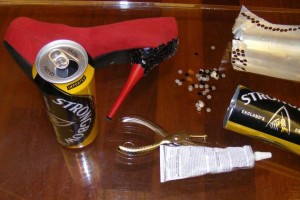 Since that meeting in Milwaukee, I’ve enjoyed an ongoing conversation with Westbrook about his work and commitment to using re-purposed material. So much of what he talked about resonated with conversations the Lemelson Center has had with the many creative and innovative people that come through our doors. In my next post, I will talk about the work Westbrook is doing to transform discarded audio tape into shimmering textiles that challenge one’s definition of luxury.