Learn more about Marion O'Brien Donovan (1917-1998), who earned 20 patents and was one of the few commercially successful female inventors of her era.

Late one night in 1946, a very tired mother was faced with a wet, crying baby yet again. Changing her second daughter's soaked cloth diaper, clothing, and bed sheets, Marion O'Brien Donovan knew there had to be a better way to keep babies dry. Soon after, she tore down the shower curtain hanging in her bathroom, cut out a section, and sat down at her sewing machine, determined to create a diaper cover that would prevent leaks. That first shower-curtain experiment eventually led to the creation of a reusable diaper cover made from nylon parachute cloth--and a collective sigh of relief from women across the United States. 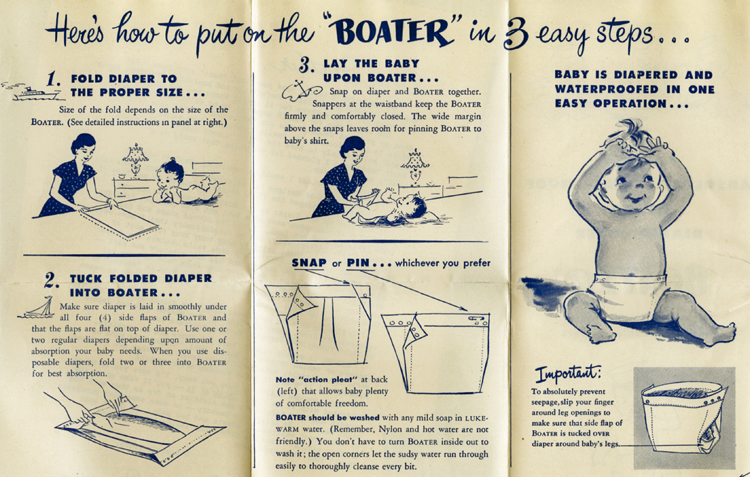 Instructions for Marion O'Brien Donovan's "The Boater" diaper cover, which became a commercial success when she began selling it at Saks Fifth Avenue in 1949.

In 1951, Donovan received four patents for her invention, which was the precursor of the disposable diaper. That same year, she sold the rights to Keko Corporation of Kankakee, Illinois, for $1 million. She called the cover the Boater, “because at the time I thought it looked like a boat.” She used the money to finance other invention projects and went on to create numerous products intended to make life more efficient, organized, and convenient.

The story of Marion O’Brien Donovan (1917–1998), one of the few commercially successful female inventors of her time, is well documented in a collection of papers that the National Museum of American History Archives Center acquired in March through the Lemelson Center’s Modern Inventors Documentation Program.

The Archives Center collections chronicle women’s role in American invention. The holdings include oral history interviews with women inventors featured in the Lemelson Center’s educational programs; along with the papers of entrepreneurs like Brownie Wise, whose creation of the “Tupperware party” ensured the sales success of the ubiquitous plastic containers; inventors in high-tech fields, like computer-language pioneer Grace Murray Hopper; and independent inventors like Donovan. This newest acquisition consists of notes, drawings, patents, customer orders, advertisements, newspaper articles, a scrapbook, personal papers, and photographs.

In September 1999, Lemelson Center archivist Alison Oswald learned of the papers through a phone call from Donovan’s eldest daughter, Christine Donovan. A few weeks later, Oswald traveled to New York to sort through two storage rooms full of papers and prototypes in the inventor’s former apartment. “As soon as I heard about them, I thought they would be a good addition to the collection,” said Oswald. “These papers will be very useful to scholars interested in advertising culture, consumer packaging, and marketing.”

Christine Donovan visited the Archives Center in July and recounted memories of growing up with an inventor mother. “Every room in the house was a laboratory,” she said. “There would be rubber bands, staples, straws all over the place. As children, we formed an assembly line to work on prototypes. She was always doing two or three things at the same time.”

Marion O’Brien was born in South Bend, Indiana. Her father, Miles O’Brien, was a mechanical engineer who, with his identical twin, John, invented a kind of lathe. He helped his daughter produce her first invention when she was a child: a new tooth powder. Her interest in dental hygiene surfaced again some 50 years later, when she invented a new kind of dental floss.

Marion earned her B.A. in English from Rosemont College in Pennsylvania in 1939. In 1942, she married James F. Donovan, who worked in the leather import business. (They divorced in the 1970s.) As a homemaker and mother of three in Westport, Connecticut, she continually sought ways to improve methods of organizing her household and taking care of her children. In a 1975 interview with Barbara Walters, she said she often asked herself, “What do I think will help a lot of people and most certainly will help me?”

“She was so beautiful and so vibrant,” said Christine, recalling that at various points in her life Marion dabbled in community theater, taught dancing and beauty courses, and worked as a beauty editor and columnist at Vogue magazine in New York.

The Donovan papers describe experiences common to many independent inventors, including the initial skepticism Marion faced about her first invention and her decision to manufacture and market the product herself. In the Barbara Walters interview she said,  “I went to all the big names that you can think of, and they said ‘We don’t want it. No woman has asked us for that. They’re very happy and they buy all our baby pants.’ So, I went into manufacturing myself.”

Rubber baby pants were available at the time Donovan invented her diaper cover, but many mothers found that the pants caused diaper rash and the elastic pinched the baby’s legs and stomach. The Boater, on the other hand, was fastened with snaps instead of diaper pins or elastic and did not constrict the baby. The design created a pouch for the diaper insert, keeping the wet diaper away from the baby. The nylon fabric also allowed the baby’s skin to breathe. “We couldn’t say it, but it did cure diaper rash, and many doctors recommended it,” said Donovan.

When the Boater went on the market, it was an immediate hit at department stores. Store managers could not keep the shelves stocked. “It is not often that a new innovation in the Infants’ Wear field goes over with the immediate success of your Boaters,” wrote Adam Gimbel, president of Saks Fifth Avenue, in a 1949 letter to Donovan.

As a woman inventor, Donovan often faced stereotyping by the media in the 1950s. In one article about “housewives that strike it rich,” it was reported that “Marion Donovan…knows nothing about science…she is baffled by any mechanism more intricate than an egg beater.”

In fact, Donovan was very interested in science, particularly in physics. Although she was often portrayed as “the inventing housewife,” her life experiences went beyond housekeeping and inventing. In the mid-1950s, she pursued a degree in architecture at Yale University and was one of only three women in her graduating class in 1958.

Her daughter remembers Donovan setting up a reel-to-reel tape recorder in her car so that she could study French and dictate letters to her secretary while commuting to Yale. A constant innovator, in the days before cupholders in cars, she installed a gimbaled glass ring from a boat supply store to keep her coffee from spilling.

Although invention kept her busy for the next two decades, Donovan finally designed her own house in Greenwich, Connecticut, in 1981. “I always wanted to be an architect,” she said in a 1994 interview. “I’m fascinated by structure.”

The idea behind her 1985 invention, DentaLoop, (a soft, blue fluffy dental floss), was to eliminate the process of winding the string around the fingers and to make it easier to slide the floss between teeth. Donovan conceived the idea while watching her second husband, John F. Butler, struggle with dental floss in the morning. (She married Butler in 1981.) As with the Boater, Donovan manufactured and sold DentaLoop to retailers herself.

Christine, who worked on market research and sales for DentaLoop, said her mother was ready to sell the rights to the product when her husband had a stroke in 1995. “We were doing very well [promoting DentaLoop], but when he had a stroke, all came to an end. . . After her husband died [in 1998], she was physically and spiritually exhausted. She died four months later.”

Christine also recalled how her mother was constantly coming up with new ideas for inventions. “One thing that was fantastic about her: running into an obstacle made her approach the idea in a new way. Her philosophy was, keep thinking and working to improve.”

Aside from the papers, objects, including several packages of DentaLoop and an early Boater, have been placed in the Museum’s Division of Costume and the Division of Science, Medicine and Society. The Marion O’Brien Donovan Papers were donated by her three children, Christine Donovan, Sharon Dodd Donovan, and James F. Donovan. 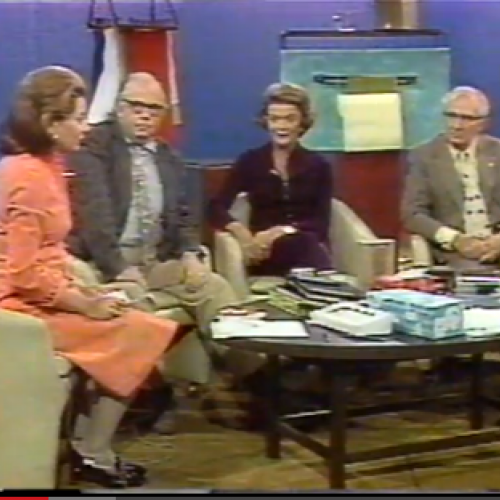 From the Archives: Daytime Talk and Invention

Jacob Rabinow and Marion O'Brien Donovan’s inventive lives intersected in 1975, when they both appeared in two episodes of "Not For Women Only" titled “Inventors and Inventions.”