The famous photograph of the whole Earth, taken in 1972 by the crew of the final Apollo mission and dubbed "The Blue Marble," is one of the most iconic images of our time.

As one of the Apollo astronauts quipped dismissively while at work on the surface of the moon, "If you’ve seen one Earth, you [have] seen them all." The famous photograph of the whole Earth, taken in 1972 by the crew of the final Apollo mission and dubbed "The Blue Marble," is one of the most iconic images of our time. It has been used to express Earth's isolation and fragility and was adopted by the growing environmental movement and the annual Earth Day celebration started two years earlier. Apollo 17 was the last piloted lunar mission, and no humans since have been able to capture such an image directly.

In December of 1972, Eugene Cernan and Taurus–Littrow valley. Near the beginning of their third and final excursion across the lunar surface, Schmitt took this picture of Cernan flanked by an American flag and their Apollo 17 astronauts Harrison Schmitt spent about 75 hours on the Moon in the lunar rover's umbrella-shaped high-gain antenna. The prominent Sculptured Hills lie in the background while Schmitt's reflection can just be made out in Cernan's helmet.

It is a great irony that this photograph should become the icon for environmental stewardship and an awareness of the limits of technology and science, since it was made possible largely by technological systems originally designed for military purposes. Still, "The Blue Marble" is an aesthetic of considerable power and simplicity--and one acquired through very complex and even accidental means.

"The Blue Marble" was the first clear image of a fully illuminated face of Earth. Earlier images captured a partially illuminated Earth--a black-and-white image of a crescent Earthrise over the lunar landscape was captured by Lunar Orbiter I in 1966; Lunar Orbiter V sent back an overexposed image of a nearly full Earth in 1967; and Apollo 8’s crew photographed a gibbous, cloud-striped Earth with indistinct continents in 1968. Stewart Brand, founder of the Whole Earth Catalog, was so inspired by the Lunar Orbiter images that he campaigned NASA to produce (or release) better images and used the Apollo 8 image on the cover of the first Catalog in 1968. It was matted with an image of the moon because only much later, in 1977, would an outbound Voyager I capture Earth and moon in a single frame.

All of these images were made possible by the coincidence of a number of factors. First, a fully illuminated Earth can be seen only when the viewer is directly between the sun and the Earth. Any other location only produces the various phases, from crescent to gibbous. Then, the angle of the observer has to be just right, since the moon’s orbit around Earth is inclined some five degrees to that of Earth around the sun. Moreover, the trajectories from the latitude of Cape Canaveral that allowed the Lunar Orbiters and the various Apollo spacecraft to arrive at the moon and enter their lunar orbits (also variously inclined to the plane of the moon’s orbit around Earth) were few, and highly constrained. Distance is also a factor, since one would see exactly half a sphere only at infinity—but a few tens of thousands of miles from a sphere that is the size of our home planet suffices to produce the illusion of a "full" Earth.

Throw in the various uncertainties of actual launch times; midcourse corrections; the fact that in celestial mechanics one never knows precisely where one is, but has only a three-dimensional cloud of probability; spacecraft orientation constraints to keep the communications antenna pointed toward Earth; spacecraft rotations for thermal reasons; the locations and fields of view of the windows; and the available cameras and lenses--and "The Blue Marble" becomes a happy but improbable accident. Buckminster Fuller popularized the phrase "Spaceship Earth" to emphasize conflicting notions of complexity and simplicity, the technological and the organic. With the lucky click of a shutter, "The Blue Marble" got that message across in one glance.

Joseph N. Tatarewicz is Associate Professor of History and Director, Human Context of Science and Technology Program, at the University of Maryland, Baltimore County.

View "The Blue Marble" image of Earth as seen by the Apollo 17 crew traveling toward the moon on the NASA website. The uncropped version of this image can be seen on the Lunar and Planetary Institute and the NASA astronaut photography websites. 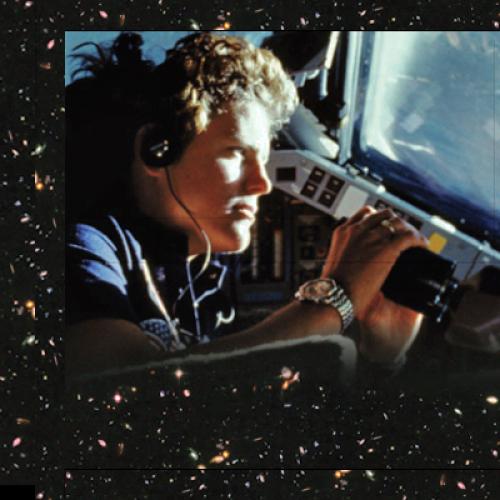 Handprints on Hubble: An Astronaut's Story of Invention

The first American woman to walk in space recounts her experiences as part of the team that launched, rescued, repaired, and maintained the Hubble Space Telescope. Published in the Lemelson Center Studies in Invention and Innovation book series with MIT Press.