Pokémon Go: An Examination of Innovation

You’ve heard of the mobile app sensation. Are its developers real-life versions of Spark!Lab inventors?

Pokémon Go is arguably the most sweeping video-game phenomenon of 2016. Days after its launch in the United States on July 7, the game had broken records for mobile applications; generated considerable short-term stock increases; and, in popularizing the “augmented reality” genre, altered the way many gamers view and interact with their world.

Whether Pokémon Go has experienced decline since its initial successes seems to be a matter of perspective and debate. What is undeniable, however, is that before and after the game’s launch, its creators demonstrated several forms of ingenuity. Creative development coinciding with entrepreneurship might have been primary factors contributing to the game’s popularity. Furthermore, Pokémon Go’s inventiveness reflects the values of the Lemelson Center as well as the lessons children learn in Spark!Lab every day.

Spark!Lab’s staff assists museum visitors in engaging with the seven steps of the Invention Process, and one of those phases occurs when we simply try out new things. By seeing if and how an invention works, we identify elements we can improve in the idea’s later iterations.

After trying out a preliminary version of Pokémon Go on test audiences, the game’s developers decided to make changes, too. Niantic ran tests of its mobile app prior to the game’s official release in July. According to reports of these beta tests, the game initially lacked a mechanism to “train” captured Pocket Monsters, which had been a major part of previous Pokémon titles. Because of players’ responses, Niantic announced the game’s “Power Up” function. The beta also gave these would-be Pokémon Trainers a chance to give feedback on the new system introduced for evolving Pokémon into more advanced species.

In our interactive exhibit, we ask visitors to “Tweak It!” by making changes and going with what we know works.

From the conceptual stages, the developers at Niantic largely drew from their existing augmented-reality game, Ingress. Pokémon Go repurposed geographical data that Ingress players had crowdsourced previously. In this way, the newer game essentially rebranded the older title, and it drew renewed popularity to the practice of virtual geocaching in the process.

Moreover, Pokémon Go focuses on the first 150 virtual Pocket Monsters, which are relatively well-known. Appealing to fans of the original Pokémon series circumvented much of the need for priming and grooming markets with advertising. Instead, choosing to harness the popularity of The Pokémon Company’s titular franchise, and of Nintendo’s reputation as a video-game publisher generally, the game drew on an existing fan base as it entered the mobile-gaming industry. As some audiences already had the necessary background knowledge and interest from their childhood—combined with the newfound spending power of adulthood—rebranding a “new” mobile app with content and features familiar to them proved an easy sell. (Anyone as yet uninitiated to the franchise will find that the Pokémon Go announcement trailer, while meant to be inviting to all, requires previous exposure for full appreciation.)

Because it utilized content from previously existing (and famously, highly lucrative) video games, The Pokémon Company merely had to tweak, rather than reinvent. Pokémon Go reanimates beloved characters for the three-dimensional, interactive experience of capturing and training in the digital landscape of 2016. This struggle is indeed a labor of love. Anecdotally I saw a young man in his twenties cackling in something between childhood nostalgia and juvenile glee. With engrossed anticipation, he was clutching his smartphone as though it were a Gameboy Color, and he turned up the volume as his tiny Charmander eventually evolved into the mighty Charizard. 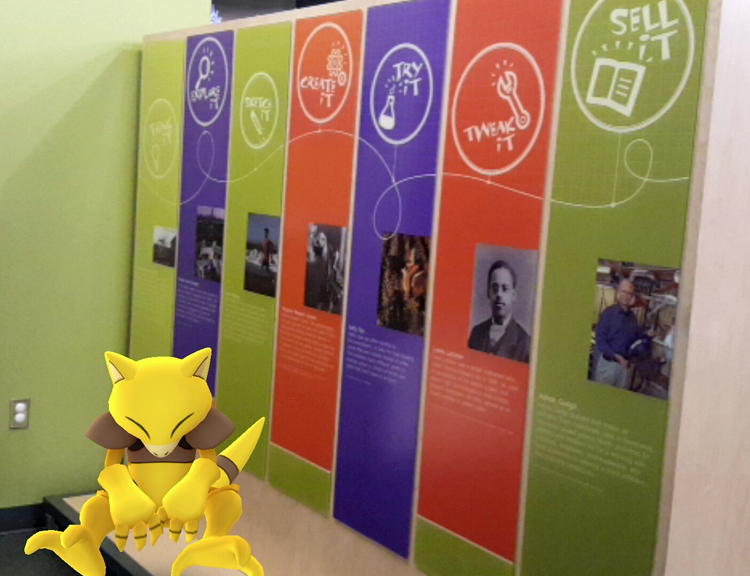 Sitting in solitude near the entrance to Spark!Lab, a Psychic-type Pokémon, Abra, meditates on the seven steps of the Invention Process. Photo by Zach Etsch

Spark!Lab’s challenges also charge visitors with imagining the process of promoting inventions, which involves the consideration of audiences, development, and marketing.

Producing a new version of Pokémon would have been no difficult feat for a company whose main objective has been to refresh and re-release franchise content over the last 20 years. In so doing, The Pokémon Company has allowed for newer generations of fans to arise. As of this writing, 765 species of the fictional monsters have been released over seven “generations,” depicted throughout dozens of video games, 13 seasons of cartoons, approximately 20 films, and countless trading cards. Meanwhile, I can’t count on two hands and two feet the number of children I’ve seen walk into Spark!Lab with Pokémon-brand hats, T-shirts, backpacks, and other merchandise. From my view, it seems Pokémon has been successfully reimagined to sell to a fresh youth audience.

Changes in the stock market, meanwhile, corroborate this narrative of success — but some prospective investors seem to have misunderstood where they were funneling their money. Nintendo observed record stock increases in the days after Pokémon Go’s release, then saw those gains dissipate when investors learned the video-game publisher is not the majority shareholder. According to Nintendo’s statement, it owns just 32% of the voting power in The Pokémon Company, who themselves only receive compensation for their licensing rights and collaboration.

No invention is perfect the first time around. Nevertheless, Spark!Lab rhetoric suggests, we value inventors for their ability to make changes, employ workarounds, and improve existing creations regardless of adversity.

Following the app’s release, many aspiring Pokémon Trainers struggled to open it, and news of Pokémon Go’s server crashes spread around the world. Niantic scrambled to deal with the overwhelming number of downloads—millions in several days. They also worked to control damage to their brand as they tried to dispel rumors of possible interference from PoodleCorp hackers.

Since then, Niantic has issued app updates roughly once every two weeks. Some tweaks fixed minor issues, such as font text or bugs in the game. However, major changes introduced in the updates, meant ultimately to improve the user experience, sometimes elicited widespread disappointment from fans.

One early failure was the tracking system, which essentially allowed Trainers to play a game of “hot-and-cold” with the virtual Pocket Monsters’ locations in the real world. Several weeks after launch, Niantic abolished this tracking system due to functionality problems. They also terminated third-party online providers of real-time Pokémon locations. Whereas players still navigate their characters by moving their physical persons around the globe, they have not been able to see how far they are from a given Pokémon for quite some time.

As months went by, the developers attempted to restore players’ trust and confront waning interest in the game. Introducing the Buddy System provided a mechanism for players to obtain the power-ups they desired—by walking a set number of kilometers, players could accrue the virtual “candies” they needed to strengthen a Pokémon of their choice. Around Halloween time, a seasonal event incentivized players with spawns of rare monsters and candy bonuses, and, in recent news, reports claim forthcoming updates will reward Trainers’ regular use of the app.

However, many fans who continue to play the mobile game are asking for further changes to its dynamics. Some desire improvements to the system of battling the monsters. Others call for the release of the Pokémon-trading system, which Niantic founder and CEO John Hanke recognized as an essential component upon the app’s launch. Since around that time, moreover, still other groups have been petitioning for Android compatibility improvements.

I’m reminded of my own advice to young inventors in Spark!Lab—in the sense that it can always be improved upon, an invention is never truly finished. 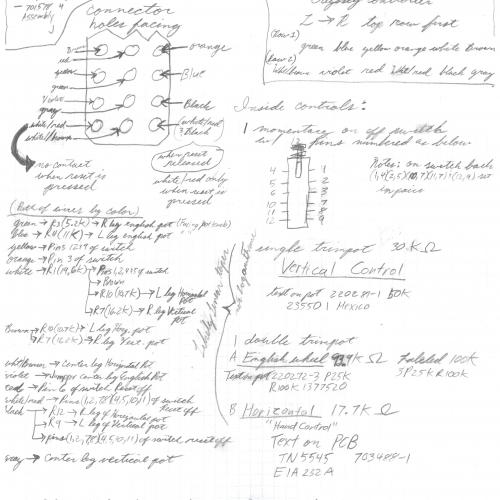 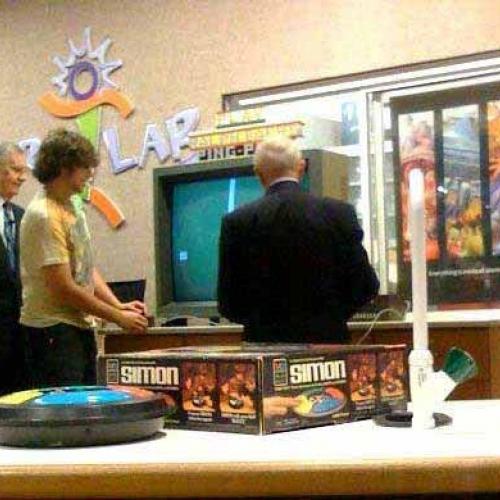